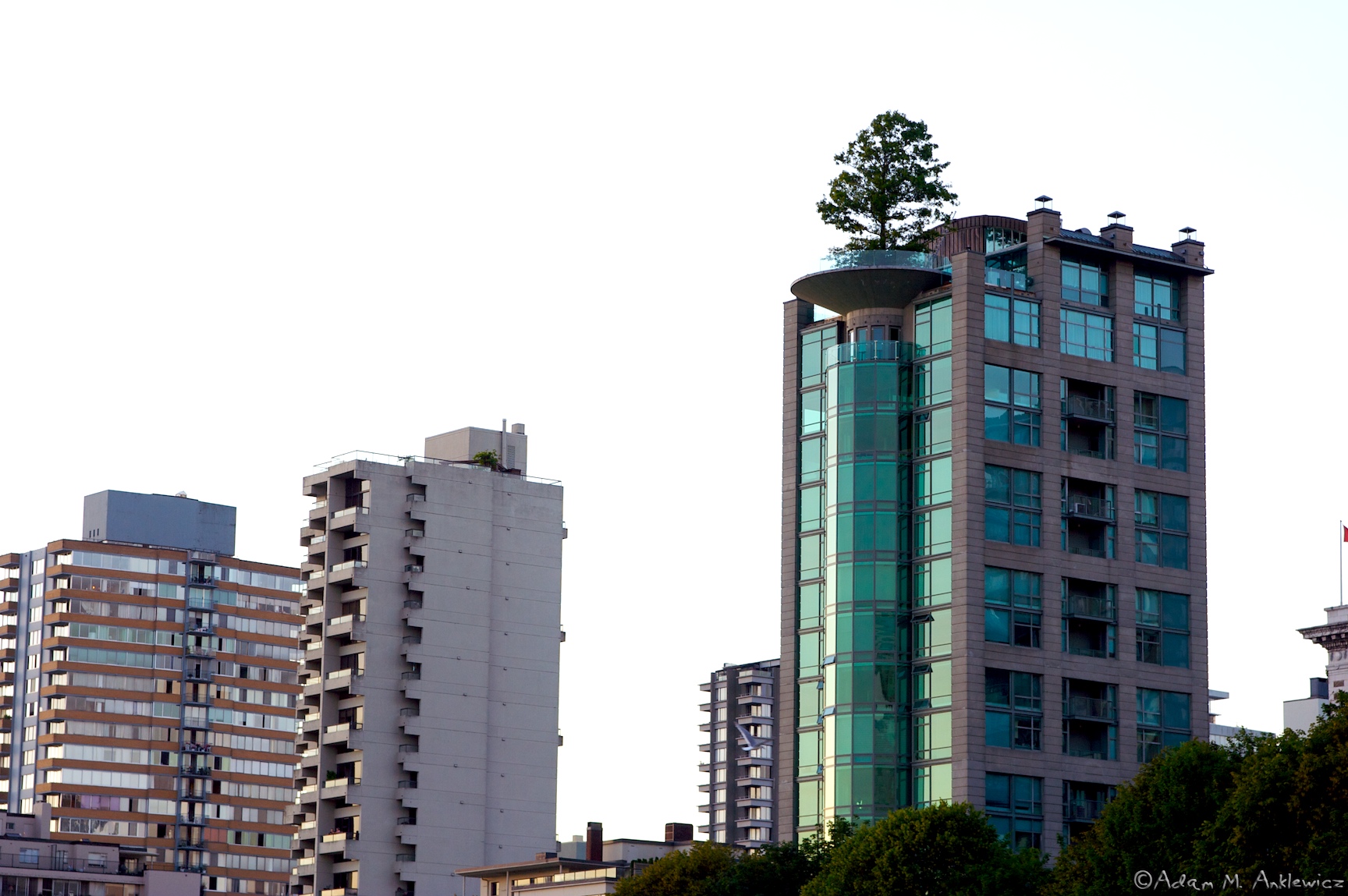 It’s Thursday morning, and I’m most likely asleep in recovery, reluctant to leave my bed. To most “Vancouver 2010” is a representation of the 2010 Winter Olympics which were held in the beautiful city of Vancouver, British Columbia. To me, it represents Five Days In July in which I took in so much of this west coast beauty. Much like most of my posts, I’m writing this well in advance. I’m actually writing it so far in advance, that I’m still in Vancouver. It’s Sunday night, and I’ll be popping on an airplane in the next few hours to head back home to Toronto. I thought I’d fill you in on what I enjoyed while I was in this fair city. 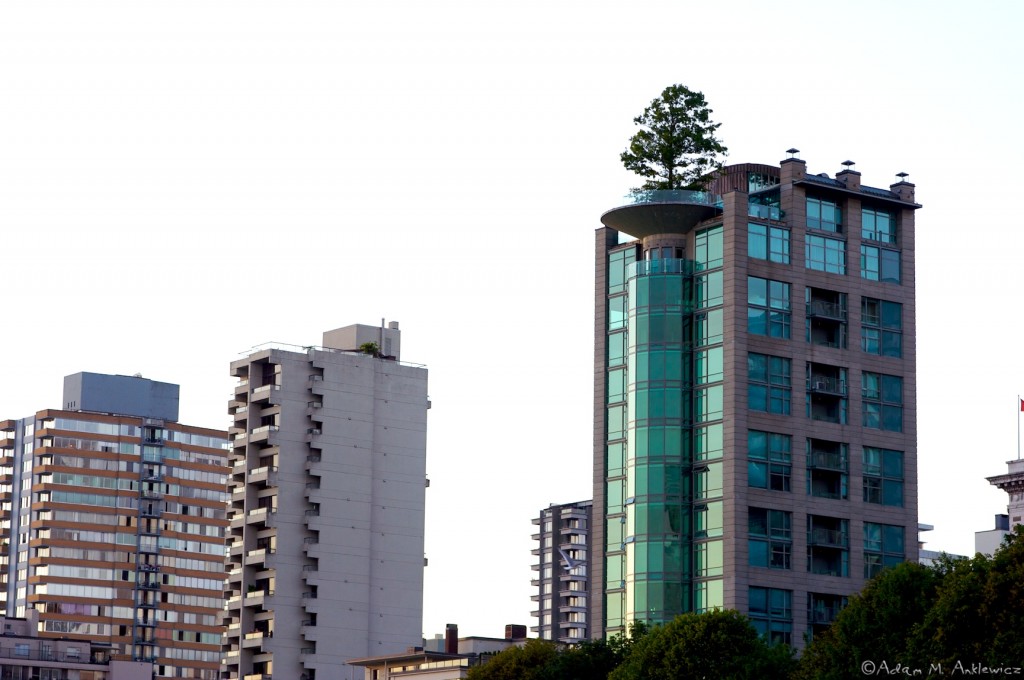 Day one – My father picked me up super early in Toronto, and we headed out to Pearson. It was mundane and normal, and I waited and waited. Eventually I boarded a plane and eventually it took off. Once it took off, I read a book, and watched episodes of Peep Show. Hours later, I landed at YVR, I found my way to the Sky Train and took the Canada Line to the west end of downtown Vancouver.  There I tried to get into my room, but discovered that they didn’t love me enough to have my room ready for me. So I made my way out to a burger joint, ate a burger, gave iPhoto support to my sister, and headed out to a beach which may or may not be called First Beach. I read.

Eventually they let me in my hotel room, and I discovered that they upgraded me to a suite, which meant full kitchen and living room. Nice. Checked in, I unpacked, and eventually wandered around the city just looking.

Before I had left for Vancouver I asked my old high school friend Kelly for some advice. Seeing as she used to live in Vancouver when she attended SFU, and at the time, she too was a vegetarian1. The first thing she suggested to me was:

I was always a fan of The Templeton (1087 Granville Street) as it was the only place I knew of to get a vegetarian chili dog. Their grilled cheese was also super awesome:http://thetempleton.blogspot.com/

I made my way over there, and didn’t try either of Kelly’s suggestions, instead I tried their Macaroni and Cheese, and I must say it’s damn close to topping Cari’s. Definitely a place to check out when one’s in Vancouver. It’s a diner, don’t expect anything spectacular, but damn good food, and quite veggie friendly. However, Vancouver is a hippy town, so we all know that veggie-friendly is mandatory. 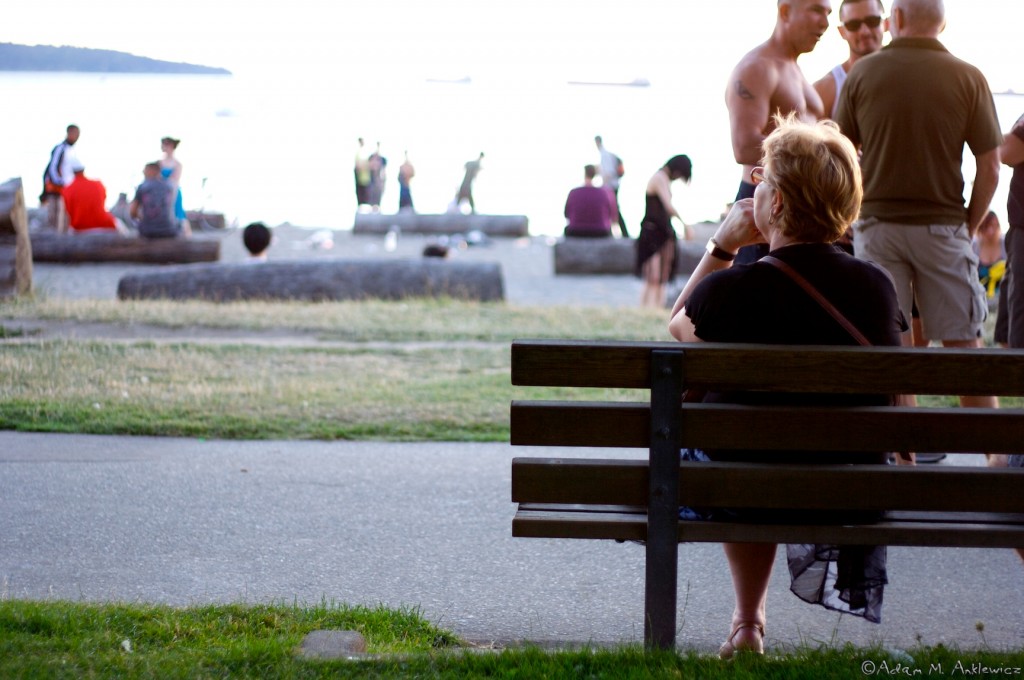 Day two – I started my day with a wander. I found myself at some shitty restaurant where I had hoped to find some breakfast. I found breakfast, but it was shitty. It was on Robson. I can’t remember the name, but then I wandered more on Robson. Went into the Shoppers, got some supplies2. I then continued walking through a street called Davie which reminded me of Church Street in Toronto, probably because they both host their city’s Gaybourhood. I saw some gays. After I got back to my hotel, I called a second Vancouverite named Kelly. This one is the sister of my ex-wife, not an old high school friend, and for the most part of this story will be the Kelly I refer to (the other one, we’ll call Kelly B., as she now lives in Toronto, and won’t play much of a role in this story).

Kelly and I went for a walk, we went along Denman to Robson, up Robson to Richards in search of Scratch Records which we couldn’t find. Eventually we found ourselves in Gas Town, which reminds me of a larger version of Toronto’s Distillery District, and then to Chinatown, which reminded me of a strange cross between San Francisco’s Chinatown and Spadina.

From there we took the Main Street bus until we got to Red Cat Records. I must give numerous thumbs up to this record store, it’s an absolute delight. Then we walked a bit up Main to Neptoon Records, where we were joined by Kelly’s fiancé and life-long boyfriend, Bryan. I must say I was thoroughly disappointed by Neptoon records, reminded me of Vortex, but less awesome.

From there we went to The Foundation, which I later discovered Kelly B. had also included in her suggestions:

Foundation (2301 Main) wasn’t bad, if you can take your vegan food with a hefty dose of self righteousness.

I didn’t find any self-righteousness, but I did find a tasty plate of nachos which three of us could not finish. I also downed a few hundred glasses of water, but you can thank the blazing heat for that.

I must note that for most of my vacation it was stupid-hot in Vancouver, but it was still 5-10 degrees cooler than Toronto. I laughed at all the people I heard complaining about the heat. These coastal kids know nothing about heat. From there, we made plans to climb Grouse Mountain on Saturday, and I would spend Friday on my own. 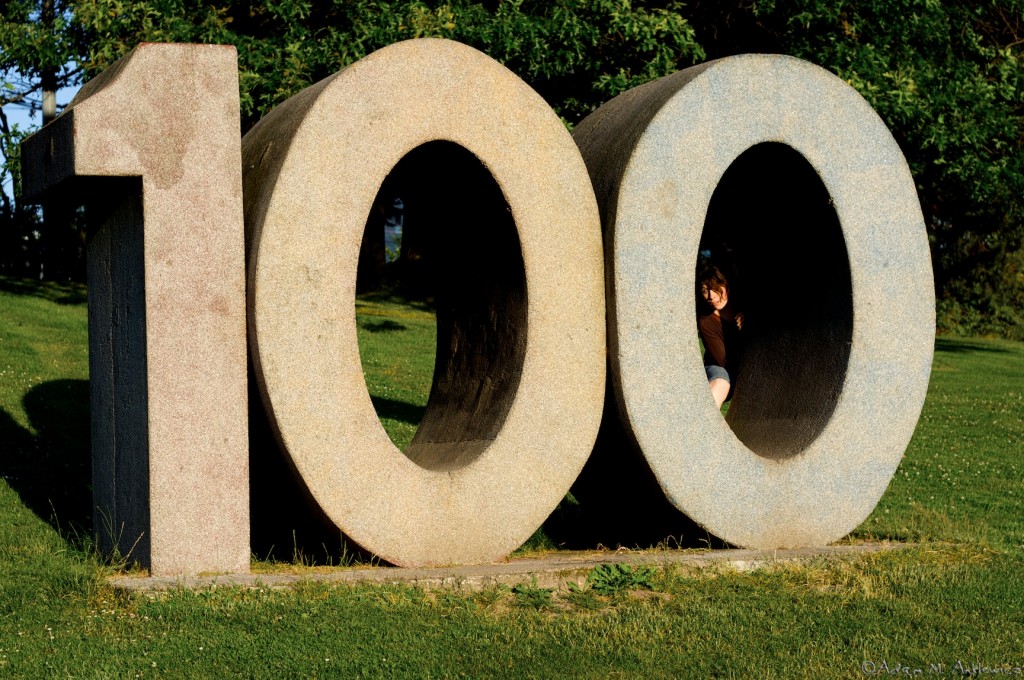 Kelly and I left Bryan and headed to Granville Island where we found the “100” pictured above. 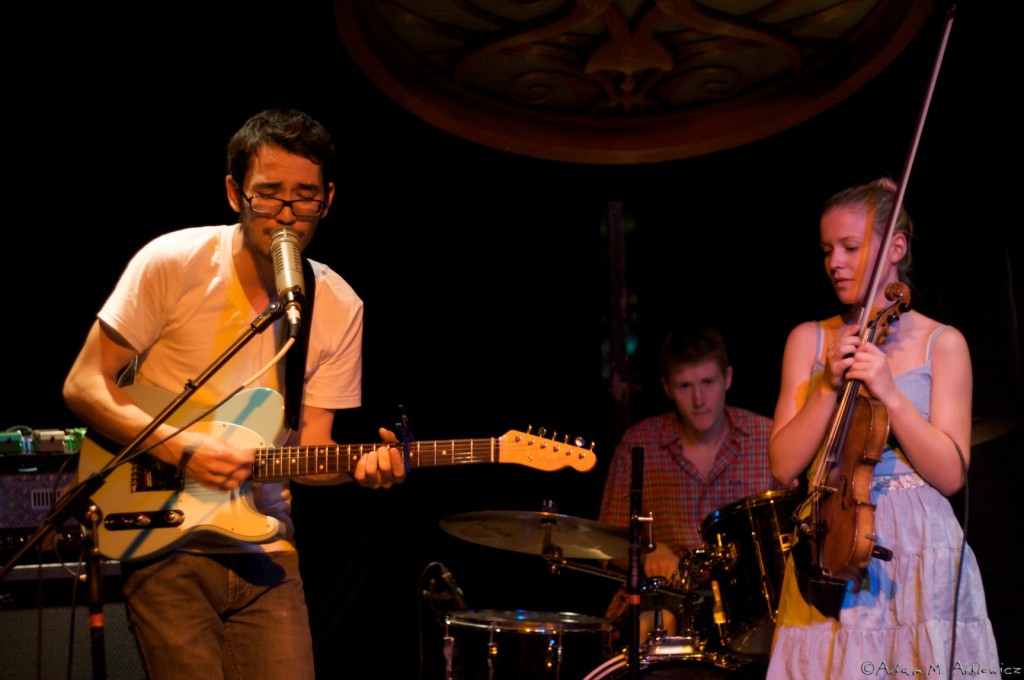 Then we went to see Jasper Sloan Yip, who’s show I wrote about in a previous post, and who’s album I will write about shortly. His set was fabulous.

Day three: Goodbye feet – I went to Stanley Park, I decided to walk the 9 km around the entire park. I was most interested in the beaches. I went to Second Beach, and read. Then I got up and walked to Third Beach, as I was walking along the sea wall, I saw this beautiful site, but I wanted to capture it with my camera, and so I didn’t want the foreground of the photo to be the sea floor (the tide was out), so I went down the stairs, and started walking on the wet seaweed covered rocks. I only brought one pair of shoes, and Converse are not the greatest traction. They weren’t doing too well on the slimey rocks. The genius that I am, I decided that the better bet would be to take off my shoes and socks. I do that, walk to the water, take some photos, and start walking towards Third Beach. As I’m walking, I slip, my feet falls between some rocks, and it hurts. I pull them out, get to the beach, look at a pretty girl who was sunbathing topless, and put my feet in the slightly cold water to numb the pain. Then I sit down on the beach, and start reading. Then I notice that there’s blood on the sand. I put two and two together, and realize that open wound and sand are not a good combination. I walk to the lifeguard, tell him of my situation, he sends me to the station, where I wash my foot, they disinfect it, and give me some bandaids. HOORAY! I read. I then hobble some more around Stanley Park. 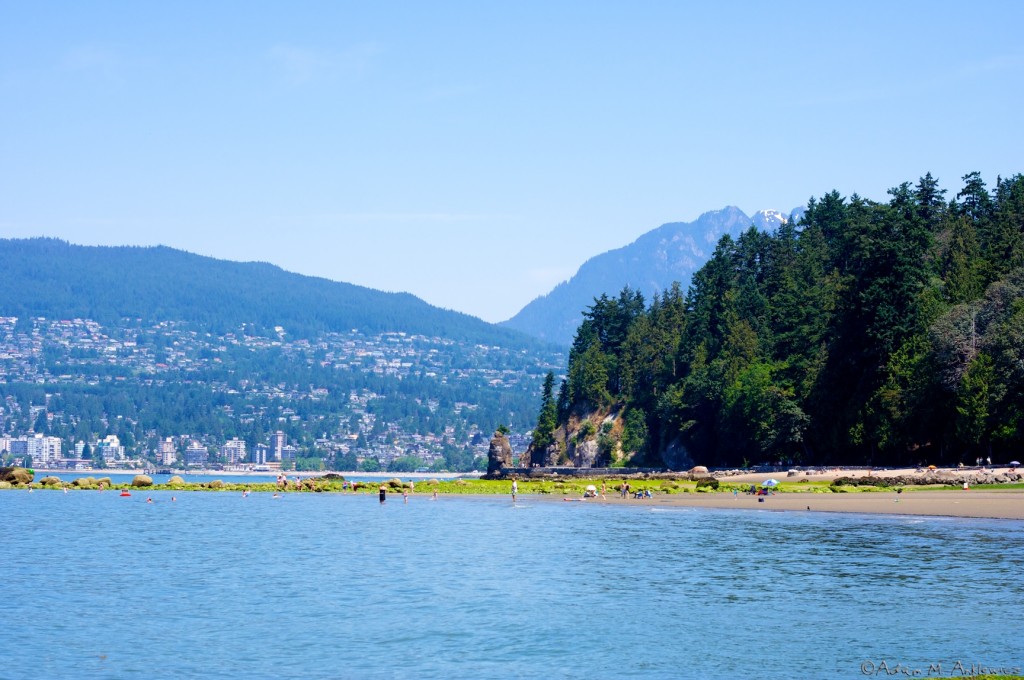 Was it worth it for this photo? Probably not, but you be the judge.

Food… what did I eat that day? I don’t recall, I don’t believe it was that thrilling then. Maybe it was the mediocre Indian buffet I found on Davie.

I did, however, tell Kelly and Bryan that I couldn’t join them Grouse on Saturday because of my feet, so we postponed it to Sunday.

Day four: Goodbye legs and back – I spent a vast majority of this day on a beach. I just sat and read, but I did a lot of walking, which adding to the already insane amount of walking I had done finished my legs. They were wobbling to support me. During my reading, I also was out in the sun, and so I got tanned, in many places; one place, however, got burned. That would be my back. OWE.

Then I met up with Kelly and Bryan at Zulu Records. Remember when I gave Red Cat numerous thumbs up? Add a couple dozen for Zulu. Zulu has the attitude of Soundscapes, the cool factor of Criminal, with the selection of Sonic Boom. A wonderful combination. I bought records, including a used copy of a Mark Berube record for Kelly & Bryan, as I assume Kelly will at least like it.

We were then also joined by Nathan, a nice bloke who’s friends with Kelly & Bryan. We went to a mexican place called las Margaritas where I enjoyed a tasty burrito and margarita.

From there we decided to stand at a corner waiting for a half hour for a bus to arrive, or until a cab came for us to flag. Neither of those two options happened, and so after so many futile attempts, we walked the two blocks to the cab dispatch where we found a parked taxi and offered him money for a ride to a Vampire Bar3. We drank. Mmm, beer. Both the beers we had were local B.C. beers, but neither of them floated my boat. We played with fire, mostly from a matchbook which Kelly gave me. The book was from The ANZA Club4, and my plan is to leave it at The TRANZAC when I’m next there.

Bryan, Kelly, and Nathan went to the Anza, and I went to bed. 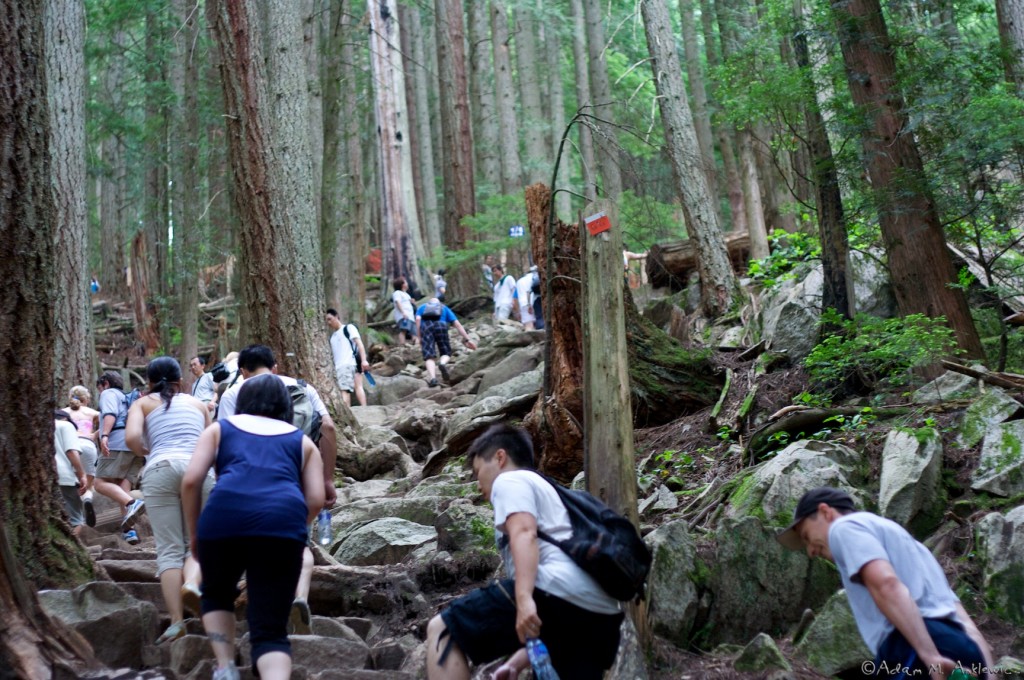 Day five: The Grind – I went up Grouse Mountain, and to get there, rather than taking the lift, I moronically chose to do the Grouse Grind, a trail 2.9 km long which rises 853 metres. After all my injuries, was I bloody insane? Bryan seemed to power up the entire trail, I couldn’t believe it, but good on him. Kelly was doing well, but staying back to keep me company. I could barely move. It took me over three hours, and fifteen heart attacks to make my way to the top. I eventually did. Then I took the Skyride down.

From there, my reaction was BACK TO HOTEL! SLEEP! So I went to the hotel, swam and hot tubbed, to heal my aching body. Then I went out to Mr. Kumpir on Bryan’s suggestion. What is it? Well, it’s this Turkish franchise with giant baked potatoes, and they cover it in butter and cheese, and then you choose three toppings to add to it for five dollars. I chose mushrooms, jalapeños, and vegetarian gravy. OMG! SO GOOD!

Day six: Farewell – Now on Tuesday, as this has passed, I can actually write about the farewell. It wasn’t exciting. I walked along Denman in the morning to find breakfast, I didn’t find anything that floated my boat, so I made my way over to the Timmy’s where I had a bagel. Mmm, mediocre food. Then I packed. Then I went to the airport and eventually flew to Toronto. From there I got a ride with Mommy & Daddy to the Danforth. HOME! KITTIES! BED! STRANGE POSTCARD FROM WOODY!