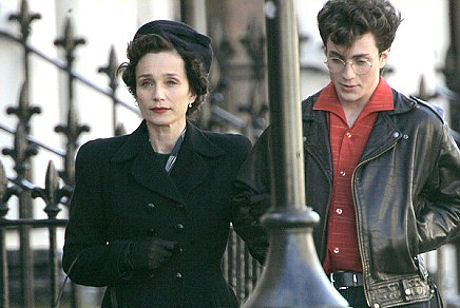 On the plane ride home from Vancouver, I decided to have a go at their in-seat entertainment system. I found in there a film called Nowhere Boy. It’s apparently a prequel to Backbeat, which is about the friendship of a young musician named John Lennon and a painter named Stuart Sutcliffe. Who would’ve thought that mostly unnoticed film would need a prequel was a bit nuts, but it was surprisingly good.

Nowhere Boy instead focuses on Lennon and his broken home. Raised by his Uncle George and Aunt Mimi. Mimi is strict, while George is fun loving. George dies an untimely death, and this affects Lennon and puts him into the rage we see later in Backbeat. Lennon also reconnects with his mother Julia and learns more about the disappearance of his father Alf1. Lennon is enamoured with his mother, and the image of Elvis Presley, who together inspire him to become a rock and roller.

Lennon starts The Quarrymen, an skiffle group, with his friends from school. Eventually he meets a younger boy named Paul McCartney, who impresses him with his performance of “20 Flight Rock,” and eventually in a brief scene we see George Harrison join the band. Thus most of the cast of Backbeat is together by the end of the film.

One of my favourite points in the film is an interchange between Paul, John, and Julia after they find out McCartney’s mother died.

Julia to Paul: So awful, your mother being taken away from you.
John: She had cancer, what’s your excuse?

The film overall is really about Lennon’s unhealthy relationship with his mother. The two are more like friends at best and lovers at worst than a mother-son relationship.

Overall it’s not a bad film, and adds some damn good backstory for Backbeat, and might even be better than Backbeat itself. Now it’s been a long time since I’ve seen Backbeat, but if I recall, the band went on to be rather big, maybe it’s time for a sequel studying that part of their career.